Inthe WHO launched its Expanded program of immunization EPI against six most common preventable diseases diphtheria, pertussis, tetanus, polio, tuberculosis and measles. Expanding the number of diseases to be coveredExpanding the number of children and target population to be coveredExpanding coverage to all corners of the country and spreading services to reach the less privileged sectors of the society Objectives of the EPITo reduce the morbidity and mortality of the major six childhood diseases.

The Expanded Programme on Immunization Benefits of immunization The first diseases targeted by the EPI were diphtheria, whooping cough, tetanus, measles, poliomyelitis and tuberculosis. Global policies for immunization and establishment of the goal of providing universal immunization for all children by were established inthis goal was considered an essential element of the WHO strategy to achieve health for all by Additional vaccines have now been added to the original six recommended in Most countries, including the majority of low-income countries have added hepatitis B and Haemophilus influenzae type b Hib to their routine infant immunization schedules and an increasing number are in the process of adding pneumococcal conjugate vaccine and rotavirus vaccines to their schedules.

The Expanded Programme on Immunization remains committed to its goal of universal access to all relevant vaccines for all at risk. The programme aims to expand the targeted groups to include older children, adolescents and adults and work in synergy with other public health programmes in order to control disease and achieve better health for all populations, particularly the underserved populations.

Immunization is a proven tool for controlling and even eradicating infectious diseases. An immunization campaign carried out by the World Health Organization WHO from to resulted in the eradication of smallpox. 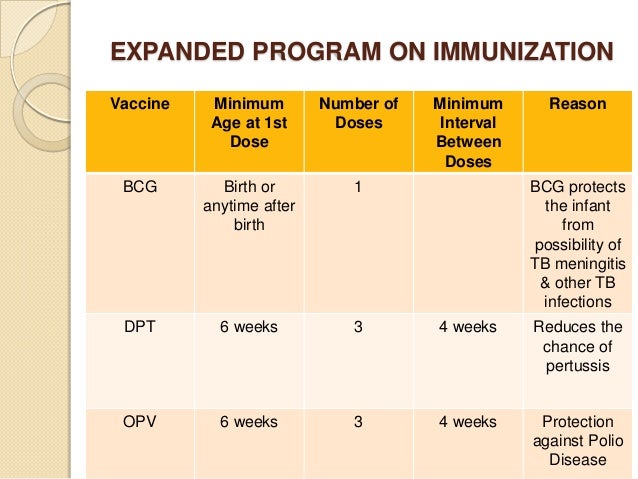 Eradication of poliomyelitis is now within reach. Maternal and neonatal tetanus has been eliminated in 20 of the 58 high-risk countries.The Expanded Programme on Immunization Benefits of immunization.

The first diseases targeted by the EPI were diphtheria, whooping cough, tetanus, measles, poliomyelitis and tuberculosis.

The Expanded Program on Immunization, EPI (PAI in Spanish), is a joint action of the world's nations and international organizations interested in supporting actions to achieve universal coverage of vaccination to reduce mortality and morbidity rates from immune preventable diseases and with a strong commitment to eradicate, eliminate and control them.